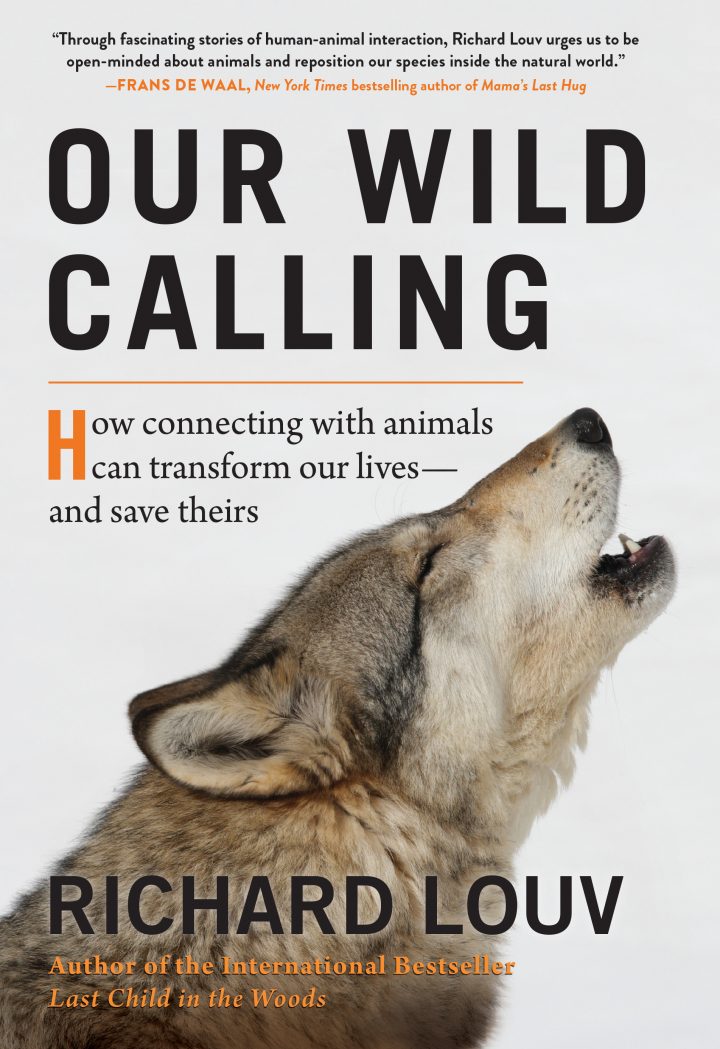 I discovered Richard Louv because of his wildly important book, Last Child in the Woods. Then I read The Nature Principle and Vitamin N. His 2019 book, Our Wild Calling: How Connecting with Animals Can Transform Our Lives—and Save Theirs continues to promote and persuade a love for nature and a love for nature education.

Our Wild Calling begins with several accounts of animal encounters. These event are often life-changing and lead to a deeper desire to continue to connect with nature. Louv cites studies showcasing how people are lonelier than ever and that the natural world, specifically connecting with animals, can change that.

As animals, we have an innate ability to communicate with other animals. “Horses have 17 separate facial expressions, second only to humans with 27.” We know how deeply connected we can be to our pets. There has been a recent explosion of knowledge about wild animals and their “thoughts”.

Louv does an excellent job exploring the often taboo subject of anthropomorphism, attributing human emotions or feelings on animal behaviors. We may get it wrong, but we are not that bad at figuring out what an animal is experiencing when we view them. And we also need to accept that when we cross paths with a wild animal, we are not an invader. They belong in their habitat and so do we.

Louv makes this point a lot in Our Wild Calling. He uses examples of coyotes inhabiting large cities such as Los Angeles and Chicago, but also backyard bears, mountain lions, and of course countless numbers of birds and other animals. The more we can understand animals and accept their presence, the better off everyone will be.

As an educator and promoter, Richard Louv excels at showcasing wonderful programs and people that want to connect, especially young ones, to nature. Deep bird language and the work of Jon Young (What the Robin Knows) highlights how we can make use of more than our “five” senses. In fact, we easily have 9, 10 and maybe up to 30 senses.

There is also some discussion on “robo-pets”, artificial intelligence and the like replacing some of the lost nature. I am equivocally against this on nearly all levels. I’ve used recorded bird songs in the past, mostly for identification purposes. But the more we open this Pandora’s box, the further away from nature we will travel. Natural exposure has to be a full immersion with all the randomness of weather, wild encounters, dirt, and yes, even potential danger.

That being said, you don’t need a dangerous encounter with a mountain lion, wolf, shark, etc. Where I live, ticks and their potential of transmitting Lyme’s disease, is about the highest risk possible on a hike (besides other humans). But even this is extremely low and has nearly no impact on my desire to take me kids out to explore with me.

Perceived risks in the wilderness would also be mitigated by exposing kids at school to class animals. Lizards, snakes, rabbits, birds, dogs, etc. should be allowed back into schools. This used to be common, but has been largely litigated out. However, the more kids become comfortable with all types of critters, the more they open their senses up to be aware when they are out in nature. Recently, my family attended a program where we held snakes, lizards, rats, and even a skunk.

Overall Our Wild Calling: How Connecting with Animals Can Transform Our Lives—and Save Theirs is a useful read, especially for educators (which of course includes parents and other guardians of children, not only teachers). There are many useful anecdotes on how we can guide kids of all ages to bridge the gap between animals and humans.

Environmentalism and more importantly, conservation, will catch on better as we reach students with useful messages. Doom and gloom about extinctions and global warming harms the movement much more than it helps. Instead, and as Richard Louv shows again and again, we can do a great deal on smaller, more local levels. And we can do it now.