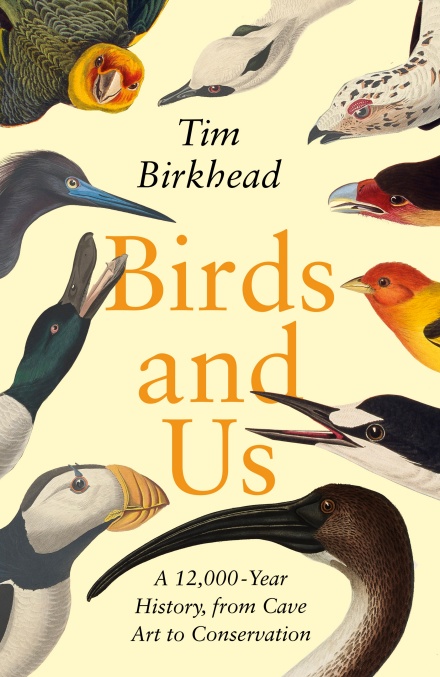 Birds and Us: A 12,000-Year History From Cave Art to Conservation by Tim Birkhead takes you on a journey beginning before recorded history to present-day worries of species decline. (VERIFY WHERE HE ENDS) My historical interest of birds usually begins with John James Audubon, but the chapters on cave art, mummified Sacred Ibis in Egypt, and a slew of other interesting pre-Audubon topics were riveting.

As this historical ornithological journey continues, we learn a lot about falconry as well as many lesser known figures that paved the way for future bird study and conservation. People like Francis Willughby, John Ray, John Gould, and a much more well known scientist, Charles Darwin.

Darwin’s contributions to science should never be dismissed and Birkhead does an excellent job of discussing his importance. Darwin is a perfect example of what some scientists are now lacking. He made extensive observations and was hesitant to overstate his conclusions. Still today there is much debate on how far evolution reaches into every aspect of an animals being.

Birds and Us shows the complications of those that collect birds for food or cultural reasons versus those seeking to fill drawers in their cabinets of curiosities. Museums still today have millions of specimens including eggs and full bird skins. Scientists still collect (kill) for science and there is still open debate on the usefulness of this.

Keep in mind there is a fine line between one society’s culture usefulness of wild animals versus a culture of hunting. There is the common dismissal of “Europeans” (aka, whites) that go about blindly collecting birds for fun. However, “indigenous” (a term that is misleading as many of these groups of people move about and replace other groups) people often get a free pass in their cultural collecting.

Next, we make the transition (mostly) from collectors to observers, leading to birdwatchers or birders. Frank Chapman is one of the leading forces for this transition. He promoted replacing the after Christmas bird hunting spree with simply counting birds. These Christmas Bird Counts continue still today and are an important Citizen Science project.

Those who love watching birds often pursue careers in bird-related fields. But the author points out how his scientific studies were often misunderstood at best and met with condescension by some. It is easy for laypeople to dismiss this work as merely “birdwatching”, when in reality intense study on even common “garden” birds is crucial to our better understanding of a whole host of important biological issues.

The lack of sound science on many “common” animals coupled with a complete dismissal of other animals as pests or abundant has had drastic historical impacts. Passenger Pigeons once had unfathomable numbers and are now extinct. The removal of apex predators negatively impacts entire ecosystems.

The book closes with the extinction of the Great Auk and the author’s own study of the Auk’s relative, the Common Guillemot. Long-term bird population studies, especially so focused, can sound a bit trying (boring). However, they are necessary and vital to knowing how badly different birds have declined. They also assist in ways that may help at least improve their chances of increasing or at least survival.

The takeaway on a chapter titled “Ghost of the Great Auk: Third Mass Extinction” is not so much the doom and gloom that bombard most environmental news of today. Instead, it is a positive take on how individuals, like the author and perhaps the reader too, can immediately get up and make a difference.

Overall, Birds and Us is a thorough history of ornithology that is appealing to most levels of birders and natural historians. Those casually interested in birds may find it a bit of a tough read. There were many interesting figures that I had never heard of, largely due to the British and European focus. Some of the chapters ran a bit long, diving into some obscure moments of bird history. There are extensive endnotes and bibliography for future research and to dive even deeper into a fascinating discovery of birds.

Note: Birdfreak.com received a copy of this book in exchange for an honest review. We are not paid or promoted by the publisher in any way.