While plotting and planning our backyard birdscaping project, a discussion arose on whether native plants are really that important, especially when a comparable “ornamental” can be used and still enjoyed by wildlife. 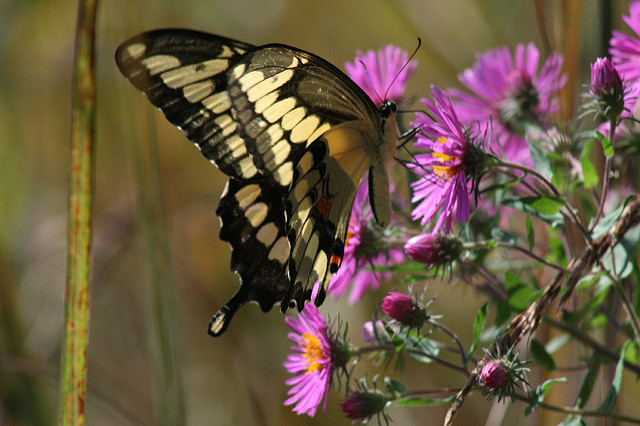 I have been hearing the phrase “use native plants” for at least as long as I’ve been interested in birdscaping (before I was calling it that), probably 15+ years. But is the concept to use native plants apocryphal? Has it been retold so many times as the “best” that it is believed to be so, even if it might not be? To figure this out, I decided to do a little research.

What Is a Native Plant? 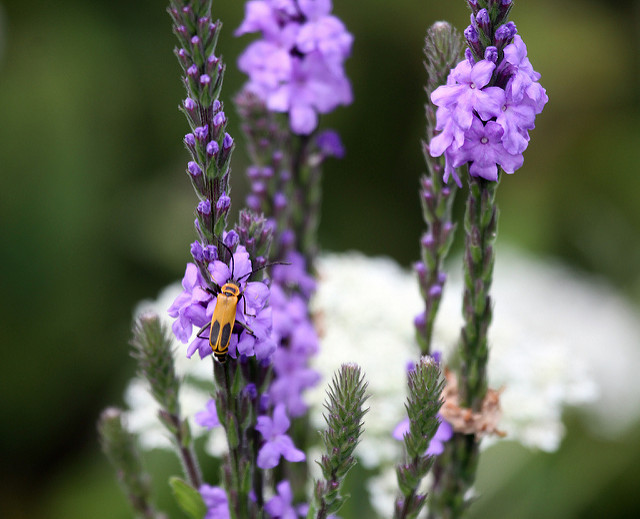 Before we get too far, what is a native plant? I’ll use the National Park Service definiton as follows:

“A native (indigenous) species is one that occurs in a particular region, ecosystem, and habitat without direct or indirect human actions (Kartesz and Morse 1997; Richards 1998). Species native to North America are generally recognized as those occurring on the continent prior to European settlement.” (1)

Of course, difficulty arises when it comes to determining what plants were here “prior to European settlement” but there are lots of resources that list plants for specific regions of the country. My favorite country-wide website for native plants is the Lady Bird Johnson Wildflower Center. But a search of “native plants [your state]” will yield lots of local resources.

Some Benefits When We Use Native Plants

The alternative of using “non-native” plants can lead to problems.

“Using non-native or exotic plants can sometimes cause serious problems for an ecosystem if the selected species spread aggressively and are not managed. These so-called “invasives” can outcompete native species for habitat and food, changing the landscape of an area forever.” (3)

The National Audubon Society, one of the nation’s top authority on everything bird-related, has a great article on why birds benefit from native plants over non native. The key component: insects.

“To survive, native birds need native plants and the insects that have co-evolved with them. Most landscaping plants available in nurseries are exotic species from other countries. Many are prized for qualities that make them poor food sources for native birds—like having leaves that are unpalatable to native insects and caterpillars. With 96 percent of all terrestrial bird species in North America feeding insects to their young, planting insect-proof exotic plants is like serving up plastic food. No insects? No birds.” (4)

One thing to keep note of is that some native plants may not be right for your birdscape. Some can also be aggressive and will take over an area, much like an “invasive” species. Also of consideration is the use of “nativars”, cultivars of native species. Wild One’s is pretty clear on saying no to their use.

“Due to the loss of genetic diversity and other potential problems described above, along with the fact that nativars are not the same as native species in the wild, Wild Ones does not encourage their use. As stated in our mission statement, our goal is “to preserve biodiversity through the preservation, restoration and establishment of native plant communities.” (5)

Interestingly, there is not a lot of research on natives vs nativars but one PhD candidate in Vermont is conducting just such a study. Annie White has been conducting research since 2011 on the varying degrees pollinators (mostly insects) use native plants vs similar nativars. This study still needs more time, but some results are interesting already.

“One clear trend was observed across all species; the more manipulated the cultivars became, the less attractive they became to pollinators. Cultivars such as Achillea millefolium ‘Strawberry Seduction’ and Symphyotrichum novae-angliae ‘Alma Poetschke’, which are the result of repeated selections in breeding programs, attracted significantly fewer pollinators in nearly all pollinator groups. The same held true for hybrid varieties from breeding programs such as Baptisia x varicolor ‘Twilite Prairieblues’ and Tradescantia ‘Red Grape,’ Echinacea ‘Sunrise’ Big Sky and Echinacea ‘Pink Double Delight.’” (6)

The problem here is that many of us who want to plant native species feel a bit duped when we go to a nursery. The plant appears to be native but has that attentional ‘name’ attached to its scientific name, making it a nativar.

It is highly encouraged to only use native plants and not nativars in habitat restoration projects. “Seeds from horticultural cultivars should not be used in restorations.” (7)

Declining Bees and Other Pollinators 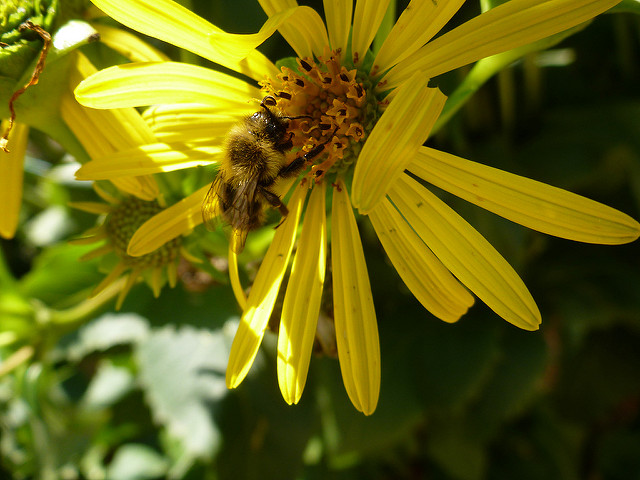 “Bee communities, both wild and managed, have been declining over the last half century as pesticide use in agricultural and urban areas increased. Changes in land use have resulted in a patchy distribution of food and nesting resources.” (8)

With the decline in bees, food supplies could pose a major threat to the world food supply. But the Pollinator Partnership is working to help backyard gardeners and farmers to help increase bee populations, including regional guides.

Not all native plants are created equal and not all are wanted for birdscaping. One of the biggest misconception is that native plants will have less insect or disease problems than non-native plants. This might not be true. “We have higher expectations in a managed landscape. A native plant suffering from a disease or insect in the woods, may go unnoticed. The same plant in a traditional landscape may give a poor appearance.” (9)

Another misconception is that the native plants are better adapted to an area than non natives. This may not be the case because of soil degradation on areas with altered habitat. Many sites have disturbed soils that will need some improvements first or lowered expectations of how well the plants will grow (in terms of size and flowering).

A third misconception, as stated above, is that not all native plants are desirable for every area. A patch of poison ivy adjacent to your porch is probably not desirable.

I poured over dozens of websites, including some of the “big names” in promoting birding and conservation: including the National Audubon Society, Nature Conservancy, American Bird Conservancy, National Wildlife Federation, and Cornell Lab of Ornithology. I also read over materials from state department of natural resources, university extensions, nurseries and garden centers plus individual blogs written by gardeners. The push to use native plants is huge and the reasons why are pretty compelling. The places that promote non-native plants and “nativars” are nurseries and “big box stores” that want to showcase bigger, more colorful “ornamentals” because they are an easier sell to most people.

The difficult part will be changing people’s perspective of what to plant. Some native plants have a “weedier” look or are considered “messy”. But what fun is looking at an explosion of colorful blooms if there are no birds and butterflies and bees to enjoy it with you? 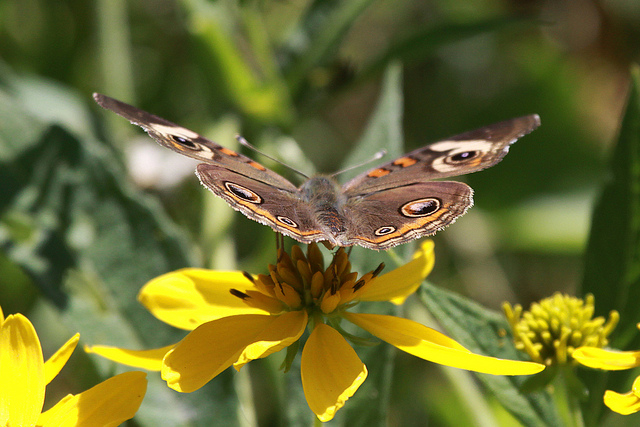 It is difficult to go 100% native, especially if the lawn is included in the mix. My suggestion is to try for 75% native (we’ll ignore lawn for now) when birdscaping. Some ornamentals might fill in lackluster areas for awhile until something else can be used. One thing I’ve found difficult in planning my own birdscaping project, beyond avoiding “nativars” is the overwhelming complexity of layers of information: height, spread, color, time of bloom, soil needs, light needs, water needs, other plants in the area all play in to the mix when choosing new plantings. The possibilities are nearly endless and it can be mind numbing to put it all together into a final decision.

So maybe it is best to remember that when birdscaping you can always change or replace plants that aren’t working for you. Although, gardening can be costly, over time and in smaller increments, it can provide a lifelong, enjoying hobby that can be passed down. And the results will pay off not only for you, but the wildlife you attract.

Still not convinced? Check out Doug Tallamy’s presentation on why we should use native plants. It is a wonderful talk and has a great focus on the importance of the plant-insect-bird relationships found in ecosystems.

This is only a small sampling of the information available about why we should use native plants. More studies need to be done and better marketing needs to be put in place to promote birdscaping over the “clean” manicured looks most everyone is becoming so accustomed to. Native plantings can be formal, beautiful, and beneficial.