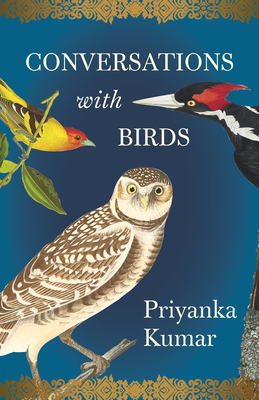 Conversations With Birds by Priyanka Kumar is a fun collection of essays about the author’s birding adventures. Born in India, Kumar moved to the United States and then lived in several states before landing in Santa Fe, New Mexico. A lover of outdoors, it took her longer to form a deep connection to birds, to official identify as a “birder”.

The collection of 20 essays covers many birding trips to various National Wildlife Refuges and other parks, mostly in New Mexico. Kumar seeks out specific birds such as owls, Sandhill Cranes, Bald Eagles, and Long-billed Curlews. However, there are many notable bird sightings in her quests as well as several encounters with Bobcats.

Some of the best essays are when the author has taken up residence in Mi Casita, the cabin built by famed naturalist Aldo Leopold. Located in Carson National Forest (named after Kit Carson), this rustic dwelling provides a perfect headquarters for side trips and hikes around the area. It is here where she has her “close call” with a Bobcat, although the incident is over in a flash.

Many of the essays tackle important environmental and conservation issues. Kumar has excellent observations on localized habitat loss, down to a specific large tree by her house. Small scale habitat loss is easily overlooked when there is so much focus on climate change and deforestation. But witnessing real, close examples of destruction is vital to the big picture. Unfortunately, she could not prevent the tree from being chopped down, but at least there was some hope. In another essay, she laments that even in the National Forest, trees are clear cut without any real good reason.

Speaking of habitat loss, the term has been so greatly overused that it has become somewhat ineffective. It is one of those obvious yet vague phrases that we now gloss over. How does one prevent “habitat loss” somewhere deep in a forest you have never been to? Another reason how local naturalists bringing the attention to local issues will hopefully make a bigger impact over time.

Kumar’s writing is good and she does a great job intermixing famous naturalist of the past: Leopold, Theodore Roosevelt, John James Audubon, as well as many local ornithologists and naturalists she encounters. Many of her outings she includes her husband and two small children which is really appreciated. It is not always easy to bring young ones “in the field” because you spend a lot of time managing their needs (what we call “levels”). But her girls are troopers and seem to be future naturalists.

Overall, Conversations With Birds provides a great starting point for non birders or newer birders. The collection as a whole didn’t feel fully cohesive. Only a couple essays felt like “conversations”; mostly birds sparking further interest and several encounters with Western Tanagers when she was having difficult moments.

There was an ongoing story that an owl was witness to the night of her grandmother’s death. Several times this is referred to. In the end though, it turned out to actually be a rat.

Birdfreak.com received a copy of Conversations With Birds from the publisher, Milkweed Editions, for an honest review.