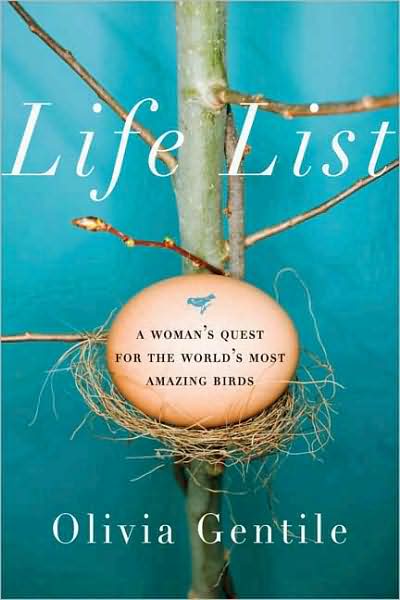 Life List: A Woman’s Quest for the World’s Most Amazing Birds

by Olivia Gentile tells the story of Phoebe Snetsinger, a woman who never felt completely happy until she found the world of birding. When Phoebe is diagnosed with terminal cancer at 49-years-old, she decides to travel in search of as many bird species she can. She beats the odds more than once, and for eighteen more years birded the world, breaking the record of species seen (8,398!)

Phoebe was interested in science at a time when women weren’t prevalent in the field and were expected to be wives and mothers. She married right out of college and had four children. Her hobby became the career she never got to have, though at some cost to herself and her family.

Author Olivia Gentile spent seven years researching and writing about Phoebe’s life. She was able to put Phoebe’s thoughts and feelings out there in a beautiful way from interviews with her family and friends and from Phoebe’s own memoir. The book is such an interesting read for birders and non-birders alike. The story brings a look into the mind of a true extreme birder.

Many serious birders can relate to the joys and triumphs of finding a rare species, or reaching a life list goal described by Phoebe. This is a fascinating book for any dedicated birder who has gone to extremes in the name of birding but anyone can appreciate the life of Phoebe Snetsinger. Phoebe was an extreme birder with intense passion and love for birds who contributed important research and touched many lives in her amazing quest.