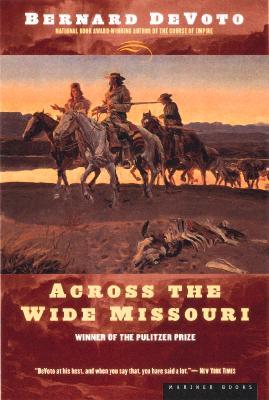 Written by renown historian Bernard DeVoto, Across the Wide Missouri won the Pulitzer Prize (history) in 1948. This hefty classic centers around the fur trade from 1832 to 1838 and delves deep in to the lives of some of the most famous mountain men and their interactions with Native Americans.

DeVoto’s writing style is detailed and thorough but with a nice conversational tone. For a history book published in 1947, it is mostly easy to digest. What is harder to handle is all the matter-of-fact violence between the trappers and natives.

Like all periods of history, the 1830s were wrought with change. The new frontier of the west had endless opportunities to explore, get rich, and start a new life. But it was riddled with danger and most trappers did not succeed or they died trying. And the Native Americans suffered along.

The explosion and failure of the fur trade paved the path for what would become full-scale expansion of the west. Across the Wide Missouri covers so much in such a relatively short period of time and place.