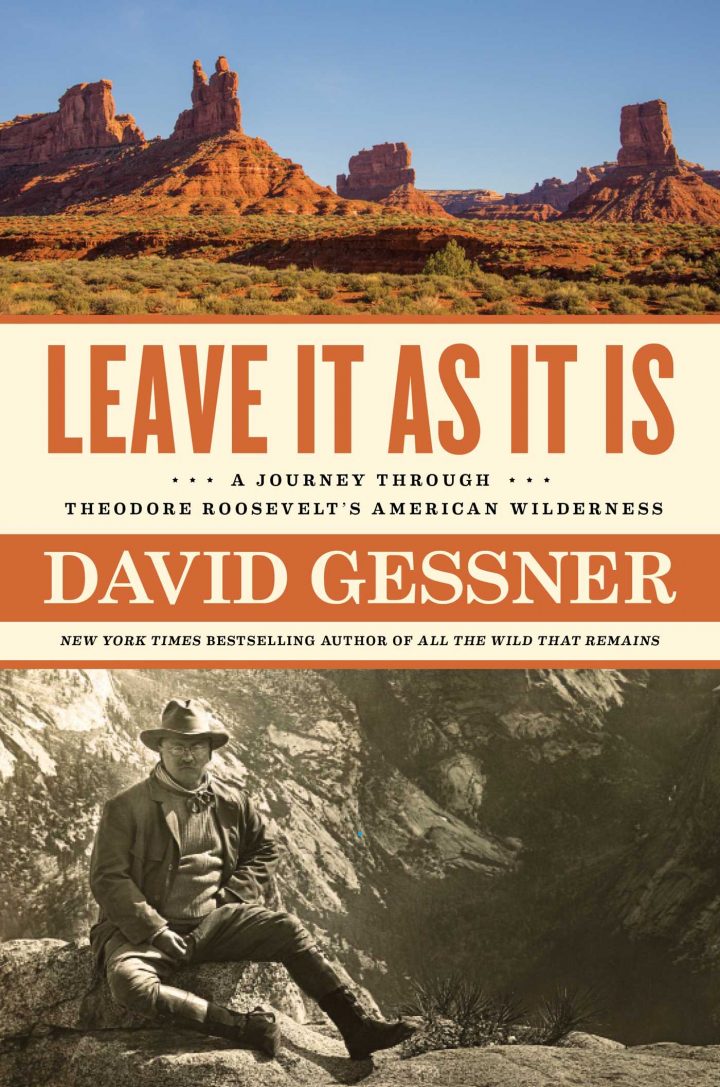 Leave It As It Is: A Journey Through Theodore Roosevelt’s American Wilderness is a duel adventure of the author, David Gessner, into the past and present. The book is part biography, part travelogue, and all conservation-focused.

David Gessner is the author of many books but the only one I read of his prior to this was All The Wild That Remains. That book was also set in the American West and covered two great nature writers, Edward Abbey and Wallace Stegner. When I found out about Leave It As It Is, I knew I had to read it.

Leave It As It Is is jam-packed with facts and opinions about Roosevelt. Our 26th president is easily my favorite and Gessner brings up many wonderful points about his conservation successes. Gessner also points out some of Roosevelt’s flaws, which looked at today may seem more glaring. However, his successes so far outweigh any negatives, it is ridiculous to not revere Theodore as a great human and conservationist.

Considering this was not a full biography of TR, at times the negatives seemed unnecessary. Too often we search for the faults of others when it is the good we should be focusing on. But overall, Gessner builds a convincing argument that Roosevelt provides a near perfect model for today’s conservationist.

The book’s title is derived by Roosevelt’s famous speech at the Grand Canyon:

“Leave it as it is. You can not improve on it. The ages have been at work on it, and man can only mar it. What you can do is to keep it for your children, your children’s children, and for all who come after you, as one of the great sights which every American if he can travel at all should see.”

The most amazing thing about this sort of thinking and speaking is that Roosevelt was going against many wealthy, powerful people. They were hoping to profit off the land and here was this “dude” saying that they shouldn’t.

The overall scope of Leave It As It Is consists of the author’s quest to find inspiration today from the history of Roosevelt. Gessner does an excellent job of this. He travels all across the west, sometimes lamenting on the crowds but also understanding he is part of them. The bigger focus is on public lands and the importance they hold combating climate change and helping humans and wildlife.

Specifically, Gessner focuses on the controversy around Bears Ears National Monument, a massive landscape preserved by President Obama and then quickly reduced in size by President Trump. Whatever your politics, the reduction was hastily done and breaks a 100 years of precedent: monument reduction may not even be legal according to the Antiquities Act.

Beyond the courts, Bears Ears provided a great uniting front of many groups of people, specifically Native Americans, and Gessner interviews and discusses many people from both sides. The paradox of protection is that most people had never heard of Bears Ears, and now tourism is increasing greatly, much like what happened to Arches, also in Utah.

Gessner describes and analyzes the Antiquities Act succinctly and explains how TR knew exactly what power it held. Roosevelt also understood the importance of large landscapes, so he also designated millions of acres of National Forest and wildlife preserves (later becoming part of the National Wildlife Refuge System).

Leave It As It Is also provides more balance than is often found in environmental-focused books. Gessner clearly loathes Trump, but he recognizes past Republicans that have done amazing things for the environment. And he also points out how Roosevelt’s thinking progressed over time. He still liked to hunt big game, but he also was empathetic towards others.

Most interesting in Leave It As It Is is the ongoing comparison of history with modernity. What Roosevelt did, conserving land, was radical and bordered on absurd to many. But today there are several groups hoping to connect massive areas of land to form continuous landscapes for wildlife. Most notably is American Prairie Reserve which is working towards the lofty goal of over 3 million acres of prairie in Montana.

Even loftier, APR dreams of connecting their lands to Bob Marshall Wilderness Complex, Glacier National Park, and Yellowstone National Park. If Roosevelt has shown us anything is that while achieving huge goals may be difficult, it is not impossible.

Leave It As It Is will leave you hopeful. Each and every one of us can act to make things happen. We don’t need the energy of Teddy to make things better. But we do need better leadership. And if we can’t find that it the highest office, lets find as many people as possible on every level of government as well as every citizen.

It is hard to fathom a modern-day president ever camping out in the mountains as Roosevelt did with John Muir. Yet his cowboy image was often mimicked by future presidents. But Roosevelt was real. He may have been speaking and writing and posing for an audience. But his efforts were genuine and he did what so few do today: he was a man of action.