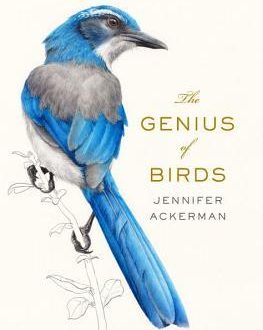 The Genius of Birds by Jennifer Ackerman chronicles some of the best-known cases that showcase bird intelligence. But the book goes beyond the famous birds like the African Grey Parrot named Alex and delves deep into the scientific studies being conducted to understand how birds think.

Inevitably, especially with a title having the word “genius” in it, these studies and theories often cross into instances of anthropomorphism, but that is ok. In fact, I believe that the complete separation between science and “feeling” does a disservice to not only studying behaviors, but to the general population who are not scientists and want to appreciate animals on a deeper level. Plus, as The Genius of Birds shows in numerous examples, birds do show complex levels of intelligence, foresight, decision-making, and more, that easily match up with some of our human traits.

In this book, “genius is defined as the knack for knowing what you’re doing–for ‘catching on’ to your surroundings, making sense of things, and figuring out how to solve your problems. In other words, it’s a flair for meeting environmental and social challenges with acumen and flexibility, which many birds seem to possess in abundance.”

Measuring intelligence in any animal, humans included, is not any easy task. And our benchmark is of course biased towards humans. But birds, as Ackerman shows, have exceptional mental capabilities, often overlooked or taken for granted.

Many animals have share similar behavioral traits, gained through convergent evolution. “As evolutionary biologist John Endler points out, ‘Again and again, in totally unrelated groups, we find many instances of convergence in form, appearance, anatomy, behavior and other aspects. So why not cognition, too?'”

Scientists tend to lean towards using the term “cognition” in place of “intelligence” but no matter the term, birds show abilities such as insight, reasoning and planning.

The New Caledonian Crow is a highly cognitive species, showing the use of tools not only to get food, but to use a tool to obtain another tool in order to obtain food.

I was at first a bit hesitant to dive into this book. The idea of birds being “geniuses” was a bit reaching. Not that I didn’t think birds had the capacity to be “smart” but that they were limited by their brain sizes and thus limited on what they could “think”. Or at least that whatever behaviors they presented were not based on intelligence, but on instinct.

This is what a lot of people assume, but Ackerman does an excellent job explaining otherwise with tons of scientific studies backing what is a wonderfully written book. The mix of science and experience flow easily, making this an enjoyable natural history addition to the library.

There are so many excellent topics covered but a few of the big ones to take note of are: bird song, nest building, and navigation. The section on bird navigation is perhaps my favorite as it explains the many theories and studies of how birds can find their way from breeding grounds to wintering sites. It even explains, with comparisons to birds, how human overuse of GPS instead of using our innate ability to navigate is causing a decrease in brain gray matter. If this is true, this also leads to a decrease in our “capacity for social understanding”. (pg. 219)

Order The Genius of Birds from Powell’s Books. (Affiliate link.)

Disclaimer: We received a copy of this book from the publisher to review.

One thought on “The Genius of Birds by Jennifer Ackerman”