I have long held a fascination with extinct birds, such as the Ivory-Billed Woodpecker. Every bird book I had as a kid included plates of species such as this (and the Carolina Parakeet and others) but did not include a range map. Instead there would be a paragraph that speculated on the bird’s probable extinction. I was fascinated because the author didn’t want to say they were extinct because they hoped they were not. 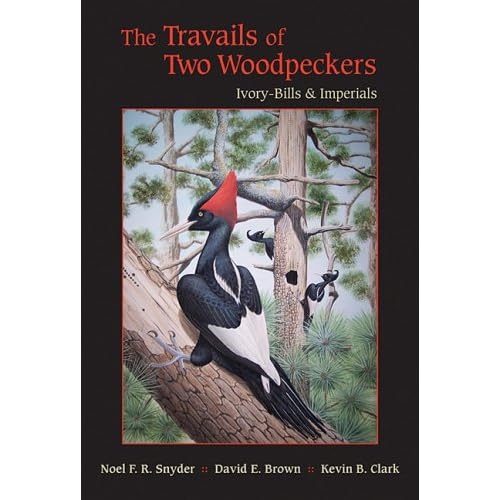 The Travails of Two Woodpeckers: Ivory-Bills & Imperials, by Noel F.R. Snyder, David E. Brown, and Kevin B. Clark, is another offering amongst recent literature about the Ivory-Billed Woodpecker. What makes this book stand out is that it also covers the Imperial Woodpecker, an equally-fascinating yet less-researched species. The authors, like many others, assume these two species are extinct, despite reported sightings.

The authors set out to “present a reexamination of the causes of the historical decline of both species and to discuss the conservation of implications of these causes” (7). Although they rely heavily on the research James Tanner completed on the Ivory-Bill during the earlier part of last century, they also refute some of his claims. Specifically, they offer a differing view of what caused the Ivory-Bill’s decline. Tanner, and most others, believe that extensive logging of the woodpecker’s habitat led to the demise of the species. Snyder, et. al., suggest that “relentless depredations” by people have long contributed to the decline of the highly-visible and large bird (7). Sadly, no one has studied the Imperial Woodpecker to the extent that Tanner and others have studied the Ivory-Bill.

The first two chapters, one covering each species, include a concise and well-researched ornithological history. They provide an informative read for anyone interested in a historical look at these birds. The third chapter discusses conservation efforts and gives a new viewpoint to the issue. For instance, conservationists have applied Tanner’s research on the Ivory-Bill to the Imperial (due to a lack of research on the Imperial), which the authors of this book believe is a mistake. The authors argue that, by understanding the history of conservation efforts towards these two woodpeckers, conservationists will be better prepared as other species face similar problems.

The book includes many photographs interspersed throughout plus twenty-seven color plates, including the only known photograph of an Imperial Woodpecker. The appendix on known sightings of Imperials is interesting but confusing to the non-scientist.

I would recommend this book to anyone who has a avid interest in conservation and to anyone who is interested in learning more about two intriguing woodpeckers that they will most likely never get to see.

3 thoughts on “Review of The Travails of Two Woodpeckers”